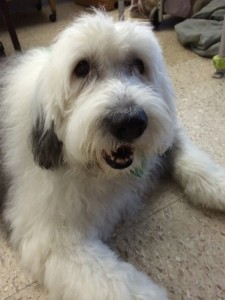 I was contacted in January, by Jan Guthrie who works with OES rescue in Wisconsin and Illinois. She was contacted about getting financial help thru rescue for a lady that was in danger of having to give up her 10 year old OES seizure alert service dog. Being that I live in Joliet, IL where this lady lives, Jan called and asked if I could check out the situation and see what she needed to help her keep Lazarus. She gave me Donna’s number and it worked out well that it was my day off so I could visit her that day.

I called Donna and you could just hear the desperation in her voice that she was so afraid she could no longer afford to buy food and pay for his medical care and medications. Donna was and still is currently in a rehab facility. She already has numerous health issues, MS and seizures to name a few. Back in October while out walking Lazarus, she stepped on a rock she didn’t see and rolled her ankle, breaking it and her foot in 3 places. Her brittle bones are impeding her recovery and she is still wearing the big boot because of that. She uses a walker for walking around the room as needed, but mainly uses a power wheelchair to get around. She is only in her early fifty’s but can’t work because of her health issues. I don’t have to tell you that she doesn’t get much money to live on and the financial strain of being in the rehab facility pushed that to the breaking point. I asked her to call her vet and let them know I’d pick up Lazarus’ medications. I also bought him dog food as she was almost out of that too. 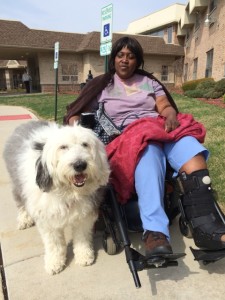 Lazarus is a real sweetheart. He turned 10 years old in February and has several health issues of his own. He’s on thyroid medication, anti-inflammatory for arthritis, and pain meds. Sad to say he also has a mass in his anal gland. I’ve talked with his vet about this and she said surgery isn’t really a good option because she doesn’t think the entire mass could be removed for certain and with his age and arthritis and weight issues, (he is very obese at 108 lbs.) he might not do well after surgery either and Donna is in no condition to help him get up. Her biggest concern is that the stool softener will only help him for so long to able relieve himself as he doesn’t have a lot of muscle to help with that and when will the mass prevent elimination altogether. Her current guess is 3 to 6 months and of course how much discomfort does he have or will have. He already has a hard time getting up off the floor. She discussed quality of life with Donna and she knows she will have to make a hard decision in the near future. It’s very sad all the way around. Donna is such a sweet lady and getting to know both her and Lazarus over the past 4 months, makes it even harder to hear.

The bond between them is so strong. I usually stop by several times a week depending on what my work schedule is. I practically have to drag Lazarus out of the room to take him outside for a potty break because he stays glued to Donna. All the snow this winter made it extra difficult for Donna to take him outside with her wheelchair. So whenever we were getting a lot of snow, I did my best to stop and help with his potty breaks. One of the conditions of Lazarus being able to stay with Donna in the facility was that she was responsible for all his care. Some of the staff will help her but not all do. I’m amazed at how many people there are so afraid of dogs.
So long story short, I’ve been paying for his food, grooming, meds and vet bills since January. I’m happy to do whatever I can to help them stay together and keep Lazarus happy and comfortable until it becomes his time to cross the bridge. Several friends that have heard his story on my Facebook page have helped me with some generous donations as has the Chicagoland OES Club that I also belong to. Still, it isn’t close to covering enough that it’s cutting quite a bit into my budget also. Any other donations would be very much appreciated. The vet bills have been increasing as of late because of his declining health. Thank you in advance with any help you can provide.

Donna had to make the difficult decision to let Lazarus go to the bridge today. He was having a hard time getting up already and last week he had a fall on the slippery floors in the hospital and just kind of went downhill from there. I went to the vet yesterday with Donna to have his leg checked out and it wasn’t a break but maybe a muscle pull or tear of sorts. He could get up on his own with a little help yesterday morning, but by late yesterday, he couldn’t get up on his own at all.

Donna called me after 10:30pm last night crying that she didn’t know what to do at that point. I wasn’t sure what to do myself because I knew I couldn’t lift him on my own. I called Sandy Poorman for help and she drove from her house in Tinley Park to my house to help. We got over there about 11:30pm and got him up and out for a potty break. I supposed him with a blanket under his belly to help him walk. We both knew last night this was coming today. So I went there this morning and helped him walk to the vet next door.

Donna is of course thoroughly heartbroken. I can’t hardly stop crying myself. I got so attached to that sweet guy since meeting him. I wanted to make sure she got his ashes back so I paid for that and the euthanasia. With the vet office call from yesterday, the bill for today and yesterday was a little over $350.00. Any help from the club funds will be much appreciated towards this cost.

I feel as though I’ve lost one of my own dogs. Lazarus was such a sweet and gentle soul. He will be surely missed by everyone in the rehab facility also. 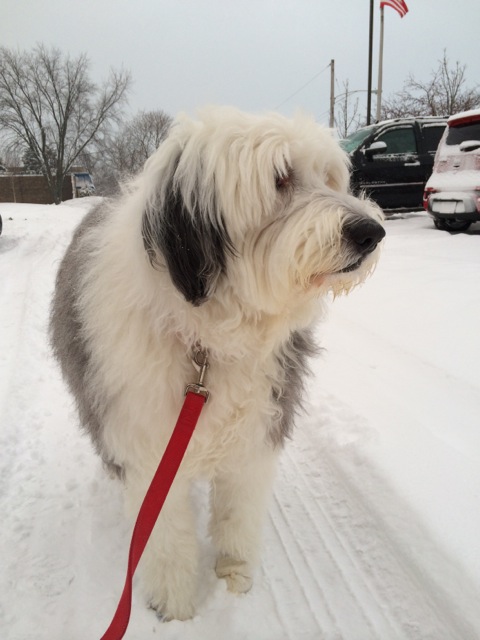 NOTE: Thank you to Cindy Parks for donating your time and funds to help another OES in need and his owner who was also put in a difficult situation. The Chicagoland OES Club has covered the funds for Lazarus’ vet and cremation costs.