Rescued from a sheep farm in Wisconsin, Okie (named because he was purchased at a sheep 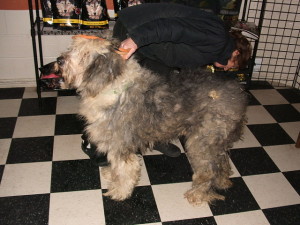 show in Oklahoma) came into rescue thanks to diligent members and friends who made sure he was saved when he “bit” the ear of a prized ram who charged him at the farm. He was raised by the former owner’s son and then left at the farm with his parents when he left town. Not wanting Okie the parents dumped him in the barn to live with the sheep about 3 years ago. He is now 5 and has not been vetted since April 2010. He was shaved when the sheep were sheared if he was lucky.

Ray Heynis, a club member from Wisconsin, picked Okie up and dropped him off with Jeri Hoppe, COESC Rescue volunteer. Jeri immediately shaved him as the odor as well as the dreadlocks, feces, straw and feathers were so imbedded in his matted coat they were causing him to be less than comfortable even walking. Jan Guthrie, also from Wisconsin, worked with Ray as to the logistics and pick up/procurement of Okie. He is now shaved, bathed and will be vetted before placement. He is good natured and likes kids despite his less than stellar upbringing. A sound dog with even temperament despite his former owner’s neglect he will easily find a “furever” home.

A typical rescue, NO. Thank goodness. Thanks to volunteers, Ray, Suzanne, Jan and Jeri for tackling all rescues with a kind heart and soft hands.